After a week of dark skies and rain, it’s a beautiful sunny fall morning here again…yay for a great start to the long weekend!! It’s time for our weekly feature ‘Staff Pick’ and our resident Dutch friend Thamar got the lucky pick and she chose the sweet natural girl Gloria! 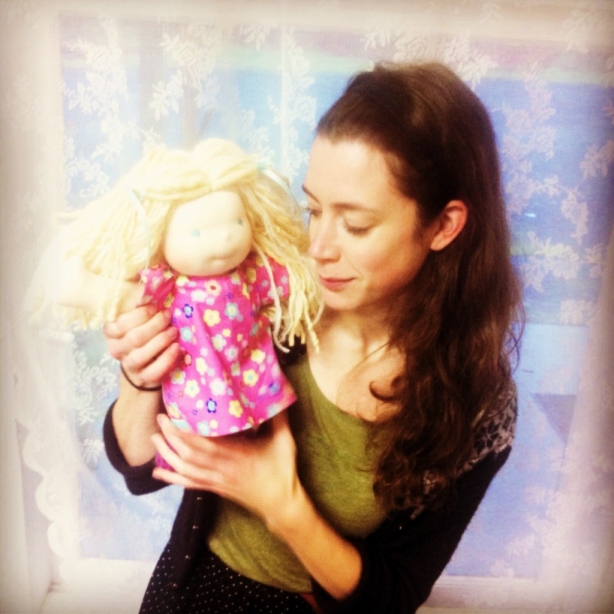 Dislikes: Rain boots with holes in them

Why she chose her: “I love the sweet natural beauties and Gloria’s face is just so lovely!”

The upload is scheduled for today (Friday) at 12pm PST…see you then!!

I have a grandbaby celebrating her first Christmas (she’ll be 10 months on Christmas Eve). She would love one of your beautiful babies.

Things in the shop …

I have this vision for my little studio shop at Whippletree Junction. I would love for it to be a sort of toy store/kids store that brings in local artisans from the Cowichan Valley and gives them a storefront to sell their wares locally. Slowly (mainly due to a complete lack of time) I’ve had the pleasure to meet a few artisans and have their things in my shop. I thought it would be nice to share them with my broader customer base too – I like the idea of us all being connected!

Today I’m featuring Rocks and Roots Apparel.  Nikki, Kristin and Carley are local moms who got together to create this line of uber sweet kids shoes, clothing and accessories using  natural materials. I LOVE the wee shoes – handmade with such care and with sweet little touches. You know, I’ve given most of my baby stuff away – diapers and clothes and toys but I’ve kept a few pairs of my boys shoes. Something about remembering how small their feet were and that they wore them so much has a special place in my heart. 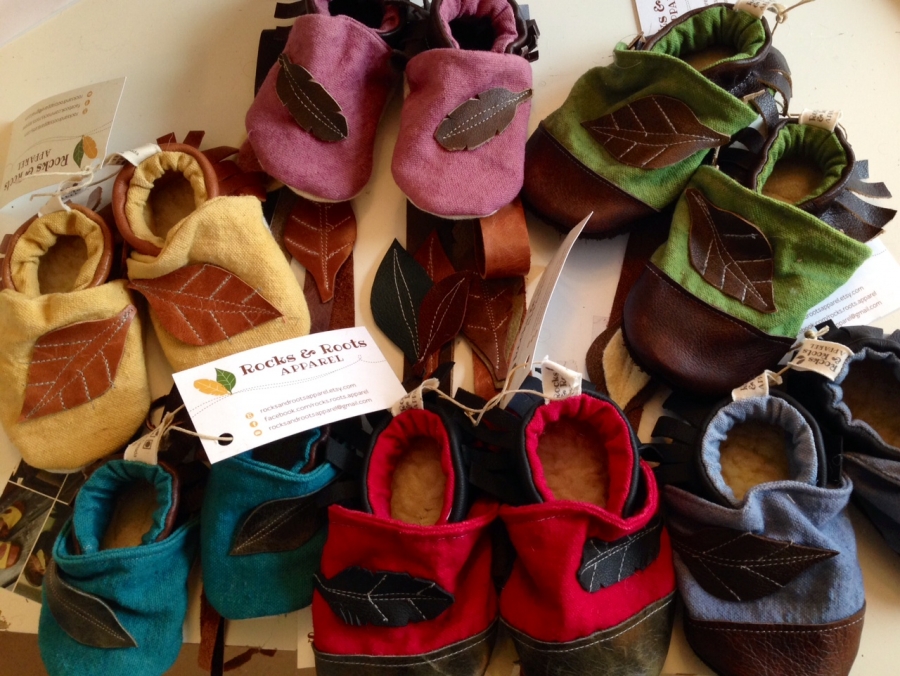 They also made us some super sweet leather headbands for dolls that we will have up for sale soon – we couldn’t resist putting one in hair. Gah! Cutest! 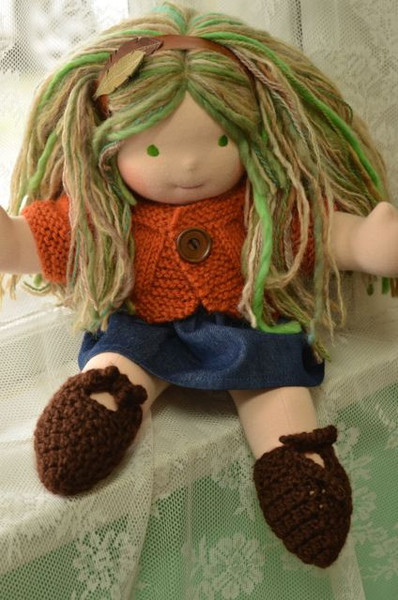 You know when you meet some people and it’s like you’ve just known them all your life? We had the pleasure of meeting Inie last summer and she’s soon become one of our most favorite people. We LOVE Inie and she loves, loves, loves the dolls – she ‘get’s’ what they are about and what they represent. I sometimes think that Inie embodies so many of our uber fans out there as I often think this would be what it would be like to hang out with all of you and have you around. We just get each other and that is a basis of an immediate kinship. Inie is a writer and last week we got to chatting about her doing a guest blog post on here once in a while – it’s so awesome to have her take on things. So, without further ado, here’s Inie’s first post! 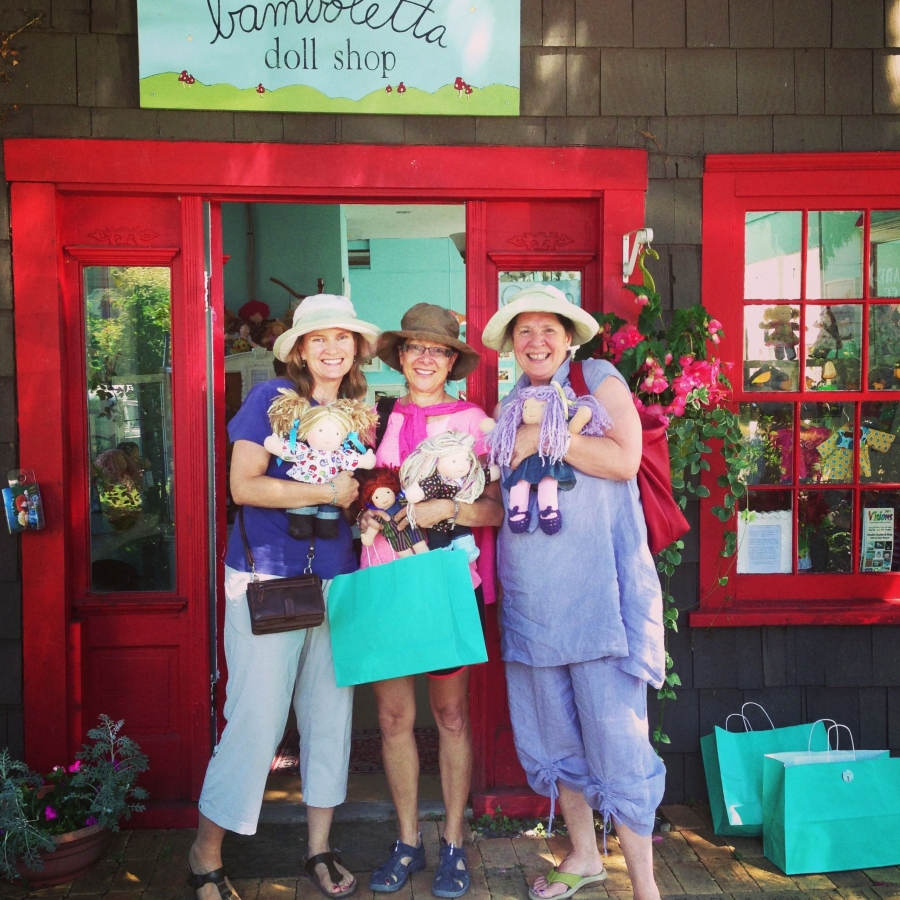 Inie with a few pals in front of our shop 🙂 Inie is on the far right.

Walking into Bamboletta for the first time was like walking into another dimension! Wee personalities gather along window sills and inside an antique cupboard! Really! The sense of “welcome” is compelling …and so I stay!

I pick up dolls, or they pick me up! Which is it? Am I drawn by the gentle button nosed faces or the outrageous lavender hair? The “messy buns” of raw wool or the wide open “pick –me- up” arms? The absolute cozy scent of raw wool stuffing or the personalities created with loving care by Christina’s team of wise women?
Or is it the integrity and open honesty of admitting “we love dolls” ~ they speak to us on levels that are safe and reassuring?

I really loved this simply written post that says so much about one’s experience of Bamboletta Dolls. A nice start to my day and I look forward to more. Thank you, Inie!

What a wonderful blog. I too am super excited because my husband and I have been in the planning stages for our summer vacation for 2014. We have both decided that we will be visiting Seattle, Vancouver, and Victoria. Of course, my husband said that a visit to Cobble Hill is in order during the week we are in Victoria. YAY!!!! I absolutely love my Bambolettas. I have a wonderful supportive husband who appreciates my love of dolls. My 29 year old daughter is getting one for Christmas and so is my beautiful granddaughter. I love the idea of passing this passion on to the ones I love most in the world. These dolls symbolize all that’s right with the world, and I am proud to have them in my home. Anyway, I can’t wait to walk through the door at the shop and meet all the lovely ladies that make these sweet dolls possible. Hugs will most definitely be in order…I’m a hugger!! Needless to say, I won’t be leaving empty handed. The hardest part will be picking one out from the group. XOX 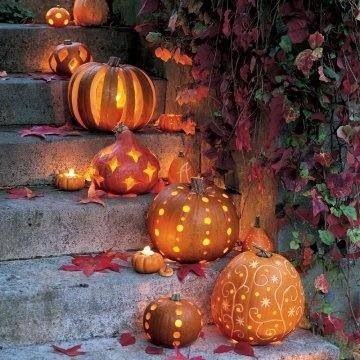 Halloween is one of my favourite holidays of the year.  And my favourite part are the pumpkins.  I love visiting our local farm and taking a ride on the tractor, picking out that special pumpkin that will be my canvas.  I love to sit back and watch my children do this, seeing what draws them fasinates me.  It is the shape the size or the curl of the stem?

Next that naughty little hobgoblin crept into the henhouse; he took all the nice brown eggs out of the nests and hid them in the corner under some straw. The next morning the farmers’ children could find no eggs to gather.

Then the little hobgoblin went right into the town, to the people’s houses; if there were any of the children’s toys in the yard, that naughty little hobgoblin quickly took them away and hid them. Then he would go up on porches and ring the doorbells, and quickly, before the people could see who was at the door, he would run away and hide.

Finally the farmers, and the farmer’s children, and the townspeople, and the townspeople’s children became very tired of the hobgoblin’s silly tricks, and one day they all gathered to try to decide what to do. They thought and thought, and then someone said, “I know how we can put a stop to that naughty hobgoblin’s silly tricks! Now, everybody go out into the fields and bring back the biggest vegetable you can find.”

So everybody went into the fields, and the largest vegetables they saw were the big, round, yellow pumpkins. Everyone brought one back. Then the man said, “Now, watch what I do.” He cut out the top of the pumpkin to make a hat. Then he scooped out all the pulp, and all the seeds, and then he said, “Now comes the important part.” And he took his knife and he cut two eyes, and a nose, and a big, smiling mouth. Then he said to all the people, “You must all make jack-o-lanterns like this, and put a candle inside each one. Then tonight, when it is dark, put your jack-o-lantern in your front window or on your front porch, and light the candle. We’ll fool that naughty little hobgoblin!” So the people took their pumpkins home, and when night came, they put the jack-o-lanterns in their front windows or on their front porches, and lit the candles.

So that naughty little hobgoblin ran a fast as he could back to his little rocky dell, and from that time on, he minded his manners! 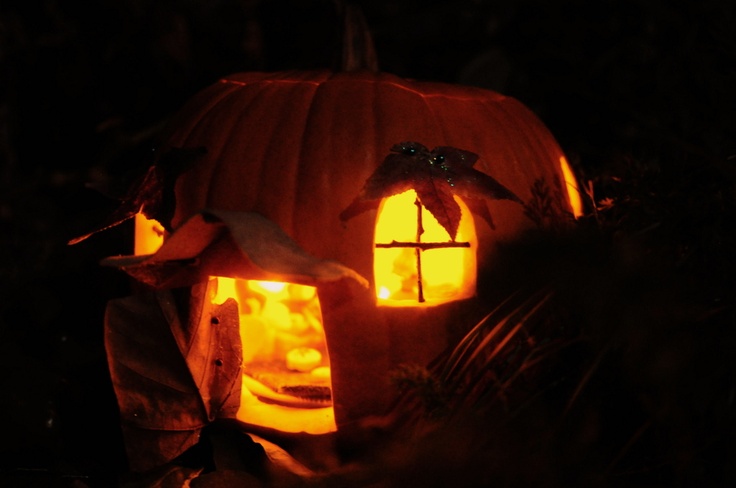 Love this story, it is my favorite one. You guys so need to make a hobgoblin Bamboletta. Just sayin

It’s a foggy, and well, spooky kinda day here in the Cowichan Valley and it’s time for our weekly feature, Staff Pick! Our gorgeous Shauna got the lucky pick today and she chose Hope, the sweet-faced natural girl with a flair for fashion 🙂 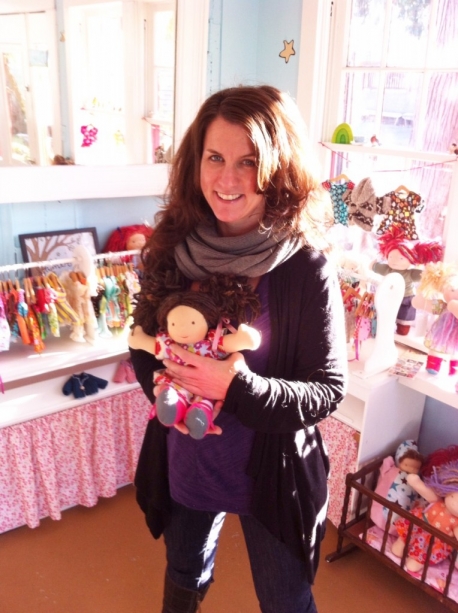 Our upload is scheduled for today (Friday) October 25, 2013 at Noon PDT on our website.